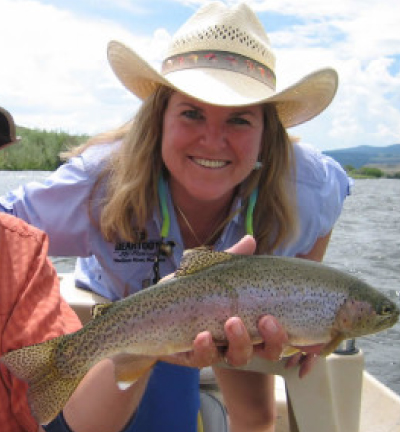 Nancy started fishing as a child on the Brandywine River in southeastern Pennsylvania, where she grew up. She also fished the saltwaters of Long Beach Island in New Jersey. Nancy began her love of fly fishing in the late ’70s, while living in Vermont and New Hampshire. She later moved to Massachusetts, and continued traveling to fish in Massachusetts, Connecticut, Vermont, Maine, New Hampshire and the Gaspe Penninsula. Nancy was the only woman in a group of weekly fly tiers traveling to different states in the west and east to fly fish. During the early 80’s, Nancy grew to know and love fly fishing in Montana. After the loss of her dad, she began to look for job opportunities in Montana, where she could pursue her loves of fly fishing and skiing. In 1999 she became CFO of H.S. Trask, a shoe company based in Bozeman. She rapidly became involved with fly fishing in the area and was soon named president of the local chapter of Trout Unlimited and Treasurer of the Whirling Disease Foundation. Nancy continues to help with these organizations when time allows.

During her time in Bozeman, she met Dan and they began fishing together; a partnership that quickly blossomed. They also recognized they approached fly fishing in the same way and always “fished hard.” The couple wed in a very special ceremony on the Madison River, as their vows were carried out on the banks of the Beartooth Flyfishing property near what is now known as Wedding Rock.

Nancy’s business acumen and long business experience has been an enormous benefit for Beartooth Flyfishing. Nancy loves retail; she grew up in retail. Her father owned a chain of retail stores where she began working when she was 12. Nancy loves the interaction with the people who come to the Beartooth Fly Shop, because they are happy, many are on vacation, and they are pursuing the sport they love. She continues working hard on expanding the retail activities of Beartooth Flyfishing, including the online store, all while trying to find more time to get out on the water and fish.

Nancy can be reached by email: nancy@beartoothflyfishing.com.