After many, many hours of tying streamers and many, many days of hours fishing them this 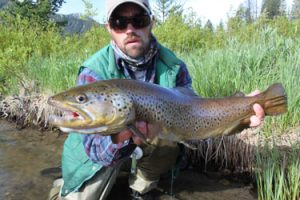 spring and early summer, I finally locked into a piggy pig pig. This hen was taken on an articulated streamer I tied the night before. Olive/brown and yellow was the color combo it took. Not a monster streamer, about 5 inches in length. She took it on a medium-slow strip from directly upstream against the bank. That’s it for the nitty gritty details. It measured 26 inches and I estimate about 8 or 9 pounds. Being REAL sneaky was probably the most important factor in catching this fish. I was fishing with my buddy Jeremy, and we knew there was a great chance of a nice fish in this area because we have pulled a few from the same area already this year. After hooking it, I knew it was big, but didn’t know how big until it was at my feet, then it got hairy. It saw me and went for the undercut bank it came out of and proceeded to hang me up on a root about 3 feet back. I was snagged. No more pulling on the line, no more fish…so I thought. My heart sank, hahaha. So, I had Jeremy stick his hand under the bank to assess the situation. The bank went back pretty far and he couldn’t 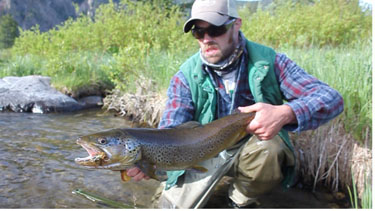 even get to the fly. He was able to feel where the line was wrapped up and along with me moving upstream and giving it a little slack, (with extreme caution, cause I thought there might still be a chance) the fish erupted back out in to the main water where I was and the fight continued!!! The fish was especially not happy to see me again and put up a ferocious fight for another few minutes. After Jeremy missed it once with the net, it tried to go around the back of him and almost got into the desired tangled up mess it might have been hoping for. It was a persistent fish, but Jeremy super scooped it like a boss and it was over!!! Thanks to Jeremy we landed her in about 5 minutes time. It was pretty cool to see a fish like this again! (it’s been a minute) There are fish in the Madison that are just huge and it takes being in the right place at the right time with the right fly…and landing it. 🙂